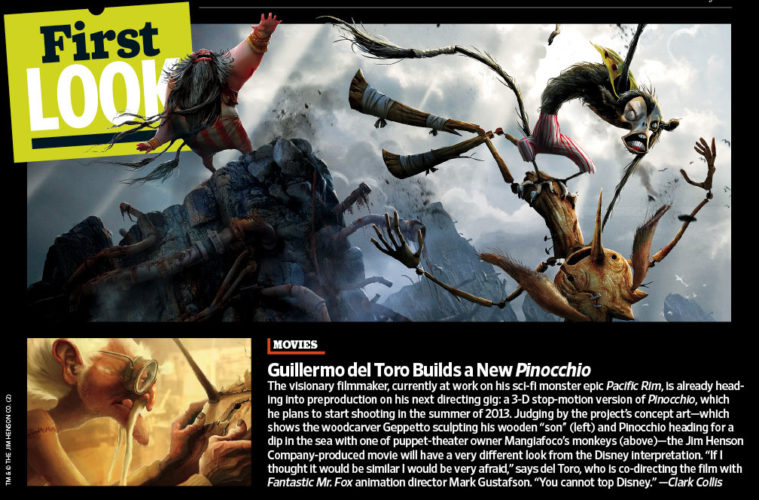 The EW article alleges that Guillermo del Toro won’t shoot his stop-motion Pinocchio for another year, but Lord knows an early state won’t prevent the poring over of concept art. One can look at and read what’s posted right above, which is both Geppetto’s construction of Pinocchio and the latter’s plunge with “one of puppet-theater owner Mangiafoco’s monkeys.” It doesn’t offer a world of impressions, but yours truly takes it as an initial sign of what’s to come; a good sign it is.

del Toro will co-direct Pinocchio with Mark Gustafson (Fantastic Mr. Fox), both of whom may be working with Daniel Radcliffe, Christopher Walken, and Tom Waits, should everyone be getting their way. If we, the collective audience, get our own way, this combination of auteur and material is bound to yield some stunning results. A well-worn tale though it may be, Pinocchio is one of my most anticipated animated outings of the next few years.

Here are some additional, beautiful pieces being developed for the film (via DreadCentral): Further down the animation path, we have a first image from DreamWorks’ Mr. Peabody and Sherman. This is a CG take on the classic ’60s cartoon that stars Max Charles (The Amazing Spider-Man) and Ty Burrell (Modern Family), with Rob Minkoff (The Lion King, Flypaper) directing for a March 14th, 2014 release. Its synopsis goes something like this:

“Based on Jay Ward’s classic cartoon, Mr. Peabody is the world’s smartest person who happens to be a dog.  When his ‘pet’ boy Sherman uses their time traveling WABAC machine without permission, events in history spiral out of control.  It’s up to this most unexpected of “father-son” teams to somehow put things back on track before the space-time continuum is irreparably destroyed.”

And here’s the fairly innocuous, vague mini-poster (via Collider): Does Pinocchio resemble a del Toro film, even from the outset? Does Mr. Peabody and Sherman hold any potential in your mind’s eye?