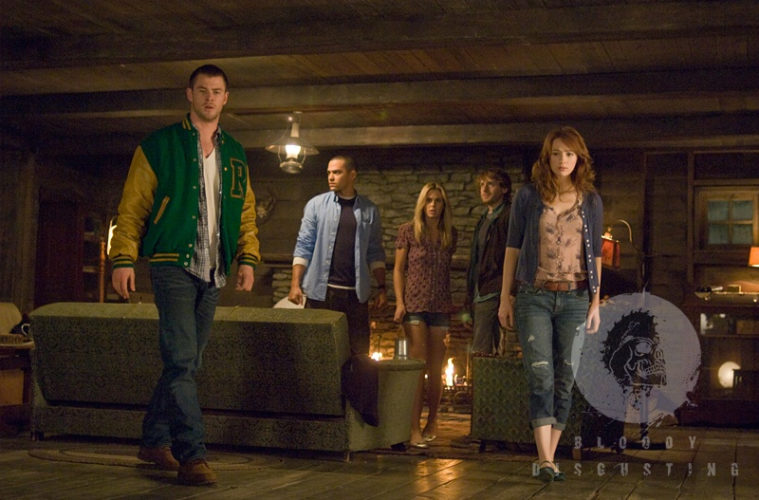 There was a brief period where the future of Cabin in the Woods — the horror film co-written by Joss Whedon and Drew Goddard, with the latter directing — was shaky at best. Early buzz on it has been great, but MGM had to go and be fiscally irresponsible, leaving a movie that was already shot in an unreleased state, and basically without a studio. Lionsgate was graceful and picked it up, with the movie now set to come out later this year.

BloodyDisgusting (via BleedingCool) has provided our first look at the movie, which can be seen above. While it’s not exactly the most revealing shot, it shows off a pre-Thor Chris Hemsworth, as well as castmates like Jesse Williams, Fran Kranz, Kristen Connolly, and Anna Hutchison. Richard Jenkins and Bradley Whitford are sadly missing, but we’ll see them eventually.

Even if it doesn’t seem like much, this should probably be taken more as a form reassurance than anything else. After all, when a movie about people in a cabin in the woods finishes filming at the end of May 2009, and still hasn’t seen a release by July of 2011, something clearly went wrong. So, just enjoy having some sort of look at the film for now. And even if you want more, take comfort in knowing that there should be many more marketing materials on the way in the very near future.

After that, there’s a look at Wish You Were Here, an Australian psychological drama starring Joel Edgerton and Teresa Palmer. While it’s (sadly) not a film adaptation of the classic Pink Floyd album, the movie is the feature debut of Kieran Darcy-Smith, following four friends who go on vacation together. Things go wrong when one of them goes missing, and they try to unravel the mystery of what happened. Some bad secrets come to light, and it wouldn’t be crazy to guess that things only get worse for our leads.

You can see some pictures below, with the rest over at the movie’s Facebook page (via ThePlaylist). It looks like it could be rather beautiful, and I’m curious how the mystery will play out. Hopefully it’ll see a release in the U.S. sooner rather than later, but a teaser is said to be coming in August, so perhaps more information will arrive along with that.

The final piece is for The Girl, the next movie from David Riker. Written and directed by the man behind the acclaimed La Ciudad, it stars Abbie Cornish as a young mother in Texas. Having lost her son to the welfare system, she decides to make money by helping illegal immigrants cross the U.S. border, but after a bad occurrence, she ends up being in possession of a nine-year-old Mexican girl, with Cornish saying that the movie becomes “her journey with a 9-year-old Mexican girl through Mexico to get her home.”

The first photo has shown up at ScreenDaily (via ThePlaylist), and it isn’t really much to take in. Just Cornish and the young girl (played by Maritza Santigo), with the former looking distressed. (She has no idea what to do with the kid!) Also starring Will Patton, some are saying that a premiere at Sundance is possible, so keep an eye out for any further updates. Are you interested in any of these movies? How do you feel about the stills?