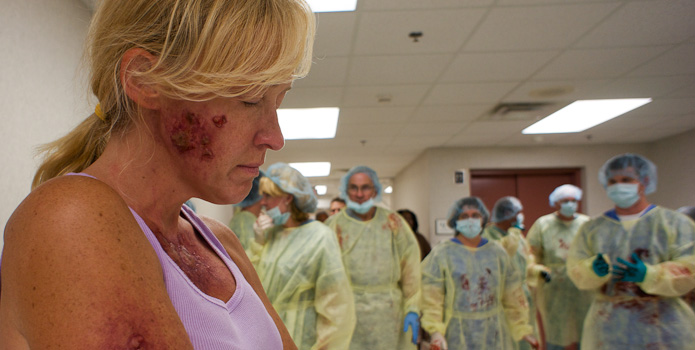 It’s enough to forget that the director of Diner, The Natural, and Rain Man made a new film. More surprising, however, is letting slip the fact that it’s a found footage horror extravaganza. Everyone can get in on the fad these days, but I can’t keep track.

Barry Levinson will premiere his genre jump, The Bay, when the Toronto International Film Festival kicks off in just a few short weeks; naturally, we have our first look. Nothing about these shots necessarily communicates the found footage aesthetic — i.e., no HUD or blinking “Record” lights — or anything past “people get sores on their body.”

But NYFF, in announcing it as part of their midnight lineup, provide this rundown:

“Oscar-winning director Barry Levinson (Rain Man, Wag the Dog) takes an unexpected turn towards eco-horror in this creepfest produced by found footage pioneer Oren Peli (Paranormal Activity) about a outbreak of parasitic ‘isopods’ in the Chesepeake Bay that literally eat their victims from the inside out. Brilliantly assembling faux news reports, internet home videos and security footage, the film holds nothing back in depicting the gruesome effects of nature’s revenge while weaving in commentary on the government’s attempted cover-up.  NYFF Selection Committee member Scott Foundas promises: ‘It will definitely make you squirm.'”

Creating a found footage picture by assembling various outside sources can be a risky proposition — there’s a thematic undercurrent in, for instance, Redacted, but it’s hard to grasp in Diary of the Dead — which leaves me a bit more tenuous. We’ll see when The Bay hatches next month.

Take a look at the other shots: On a related note, NYFF have two other titles for their new Midnight Movies banner. One is Takeshi Kitano‘s Outrage Beyond, the sequel to Outrage, while Toby Jones will be making an appearance with Berberian Sound Studio. The latter’s trailer gives off some vibes of Brian De Palma‘s Blow Out; always a good thing, though this might even stand on its own.

Read about their induction below:

Outrage Beyond / Autoreiji: Biyondo
Writer-director-star Takeshi Kitano‘s superior sequel to his 2010 Outrage is a yakuza delight by a true master of the genre. After eliminating all competition in the first film, the dominant Sanno clan’s young boss Kato (Tomokazu Miura) arrogantly refuses to share power or play nice with the Japanese police. This infuriates corrupt cop Kataoka (Fumiyo Kohinata) and inspires him to team up with the rogue yakuza Otomo (Kitano)—he’s not dead after all!—leading to a historic showdown. In the words of Scott Foundas, “eventually everyone starts killing each other again, but with great panache.” Sure to delight fans of the original and newbies alike, this slick action flick is cool and deliberate with bone-rattling bursts of violence sure to keep you alert, no matter the hour.

Exciting young British director Peter Strickland (Katalin Varga) literally screams his love for the Italian giallos of the 60s–80s in this sumptuous period piece about a British sound engineer (the wonderful Toby Jones) who travels to Rome in 1976 to work on the post-synch soundtrack to The Equestrian Vortex. Reminiscent of Suspiria, this film-within-a-film is a tale of murder and witchcraft set in a all-girls equestrian school. But the real action is in the recording booth, where Jones‘ Gilderoy and his team mutilate unsuspecting fruits and veggies and tape an impressive array of screams and shrieks to create their soundscape. Over time, though, the line between the film and the production blurs and Gilderoy begins to suspect that he is the subject of a whole other set of frights. Berberian Sound Studio is an absolute delight, not to be missed by fans of horror or cinema in general.

Are there any impressions to be made from these first shots of The Bay? How do you feel about the NYFF midnight slate?