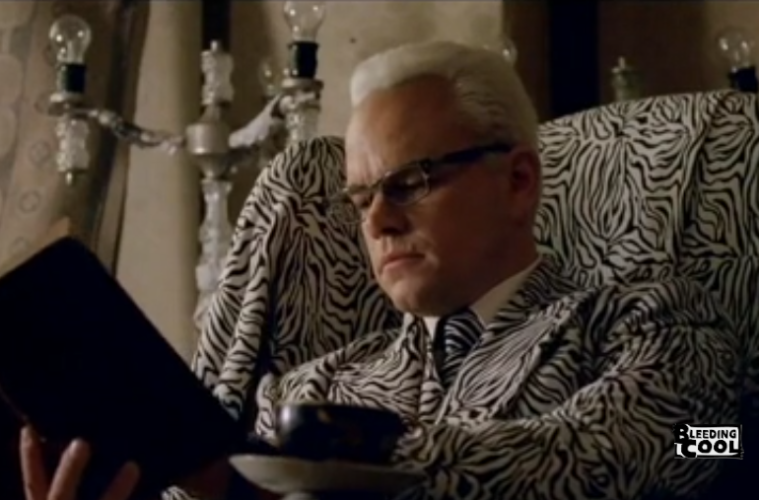 Update: Zero Theorem image removed at the request of the producers.

After last year’s Promised Land unfortunately went overlooked, Matt Damon is back in the spotlight this year, having taken part in Steven Soderbergh‘s last film for some time, Behind the Candelabra, and is featured in one of our most-anticipated entries of the summer, Elysium. This fall will bring two more projects we’re looking forward to and we’ve got new images from each.

First up, above, one can see the debut look at Damon in Terry Gilliam‘s Zero Theorem. While his role is said to only amount up to a cameo, he plays a character named Management, according to Bleeding Cool. Also featuring Christoph Waltz, Tilda Swinton, Ben Whishaw, David Thewlis, Melanie Thierry, Peter Stormare and Sanjeev Bhaskar, hopefully we’ll see the high-concept film by year’s end.

Moving to what may be the second Damon/Bill Murray collaboration, we’ve got new images straight from the set of the WWII drama The Monuments Men. Directed by (and starring) George Clooney, the cast also includes Cate Blanchett, Jean Dujardin, Bob Balaban, Hugh Bonneville and John Goodman as we follow a group who help retrieve stolen artwork from the Nazis. Check out the new images of our ensemble (including what looks to be composer Alexandre Desplat having a cameo) on the Germany set below via The Daily Mail/Tumblr. The Monuments Men lands on December 18th, while The Zero Theorem could premiere on the fall festival circuit.