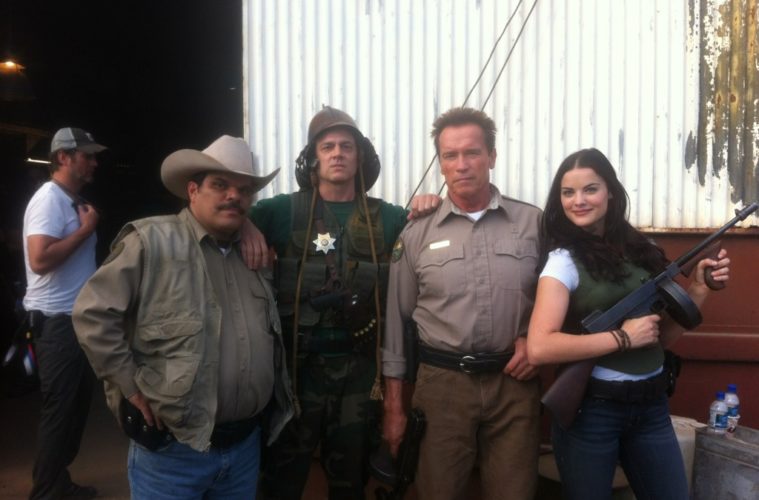 As the headline tells you, right above is your first look at Arnold Schwarzenegger and some of his co-stars in the currently-shooting The Last Stand. The actor tweeted this photo from the set, showing (from left to right) Luis Guzman, Johnny Knoxville, he, and Jaimie Alexander in their law enforcement garb. I don’t intend to be mean — honest — but it’s odd how Schwarzenegger looks younger than Knoxville, a man nearly 24 years his junior. To be fair, if you were on Jackass for a decade…

Kim Ji-woon‘s English-language debut also stars Peter Stormare, Rodrigo Santoro, Zach Gilford, and Harry Dean Stanton, and has a script by Andrew Knauer, Jeffrey Nachmanoff, and George Nolfi that centers on “a cop in a border town as he tries to prevent a Mexican drug cartel leader from escaping to his home country.” Short story: Arnold is back to wreak havoc. He’ll get down to doing so on January 18th, 2013.

The other film that our first peek is emerging from is Roger Michell‘s Hyde Park on Hudson. Starring Bill Murray as Franklin D. Roosevelt, the rest of the main cast is filled out by Samuel West and Olivia Colman as King George VI and Queen Elizabeth, respectively, Olivia Williams as Eleanor Roosevelt, and Laura Linney as his fifth cousin/mistress, Daisy. This is an adaptation of screenwriter Richard Nelson‘s own play, which tells of English King and Queen’s first visit to the United States, specifically to the President’s (lovely) home in Hyde Park, N.Y. All the while, Roosevelt’s affair with his cousin was becoming a problem with Eleanor. As a choice that feels generally appropriate to me, they’re taking a somewhat comedic approach to things; Michell says that we get to see “two cultures crash into each other.”

Murray is the only one pictured here, but it’s entirely crucial that we get a look at him above everyone else. Thanks to USA Today (via Hollywood.com), it’s finally hit. And even though I love Murray to death, him being cast as FDR raised some skepticism for me. I still don’t know how he’ll actually embody the former President, but he has the look down, no question. We know that at least one thing is going right thus far, and the actual film will come our way next summer. Are you happy to get a glimpse at Schwarzenegger’s return to leading roles? How does Murray’s FDR look to you?