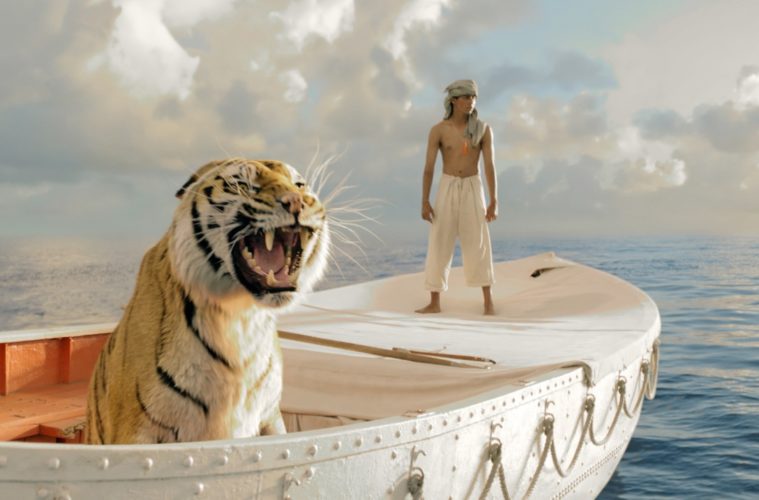 I’ve seen many movie months come and go, but this December could be the most crowded period for big releases I can ever remember. Over the course of just more than ten days, multiplexes will be inundated with Les Miserables, The Hobbit, Kathryn Bigelow‘s Zero Dark Thirty, This Is Forty, Life of Pi, One Shot, The Great Gatsby, and Django Unchained.

And, among those eight, Ang Lee‘s Life of Pi has to be the lowest-profile. It might be directed by an Oscar winner, it might have Tobey Maguire in a decent-size role — and it’s even based on a successful book — yet the production has been almost entirely silent. We now, however, have something to take in; our first look at the film has arrived from CriterionCast, giving a brief impression of the film’s primary location, its star (newcomer Suraj Sharma), and, you may have noticed, a tiger. This should all make just a little more sense when you know that the film follows “a boy who is lost at sea for 227 days in a lifeboat with three unusual and increasingly hungry companions — a Bengal tiger named Richard Parker, a hyena, a zebra and an orangutan.”

It’s not a whole world of visual information being displayed in this instance, but a relatively nice first look may just be the tip of Fox’s marketing iceberg. With a big budget and prime release date, they’ll need to put that into full swing.

Update: The first footage just screened at Cinema Con. Check out some overwhelmingly positive reactions below.

Ok, so Ang Lee’s “Life of Pi” will be getting a best picture Oscar nomination. The footage screened at #CinemaCon could claim one for short!

Most impressive footage – Ang Lee’s Life of Pi. Looks magical, wonderful. From what we saw… this is going to be a strong Oscar contender. I just said to @akstanwyck after coming out of Life of Pi footage: “the Oscar race has begun.” Her reply “yes it has.” Looks wonderful.

They also premiered footage from the fantastic looking Ang Lee Christmas movie LIFE OF PI. 3d looked great. Looks like this years HUGO. Also LIFE OF PI is an absolute Oscar contender for Best Picture. Looked incredible, magical, and everything you want in a movie.

Footage from Ang Lee’s Life of Pi screened at CinemaCon: full of cinematic magic, wonder. Underwater 3d stuff looks amazing. I know it’s too early and stupid to make such claims but I’d be amazed if Life of Pi isn’t nominated for Best Picture.

Wow. Tons of Life of Pi footage just showed. The co-star is a giant cat! Underwater 3D stuff is wow. I teared up a little at the trailer.

Mark my word, based on the footage shown at #cinemacon Ang Lee’s LIFE OF PI is going to be a MAJOR player at this year’s Oscars.

LIFE OF PI footage absolutely wrecked me. I cried. Choking up thinking about it. This doesn’t happen to me. The master at work. #cinemacon

Ang Lee’s LIFE OF PI looks so special, wonderful to hear him speak about it, can’t wait to see him bring that book to life #CinemaCon

What do you think of this first look?