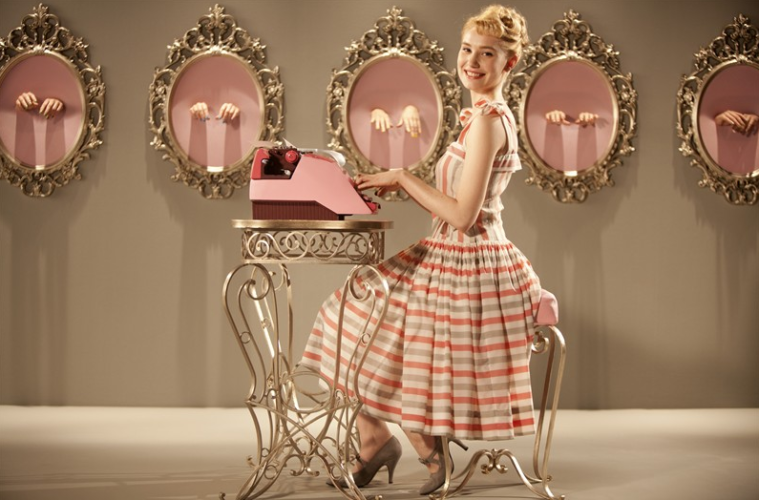 Having taken home the Best Picture statue with a period piece two years in a row now, your or I would be hard-pressed to blame The Weinstein Company for grabbing these things whenever they crop up. Next for the titans of independent film would be a French-produced, America-set picture featuring the onscreen charms of Bérénice Bejo and DP talents of Guillaume Schiffman.

No, don’t worry — that movie isn’t coming back to theaters.

I’m actually talking about Populaire, a Regis Roinsard-helmed, ’50s cinema-inspired comedy that stars Deborah Francois (pictured above) as a young woman who, upon arriving in New York City for a typing contest, finds herself engaged in some romance; Romain Duris will play her mentor and lover. The first shot has arrived at the site, courtesy of the Wild Bunch website (via ThePlaylist).

Not much can be taken from the above image — other than “that looks pretty” — though it does, regardless, whet my appetite for a little period fetishization. And if it doesn’t rely on a) erroneous ideas of how a movie from that period is supposed to look and feel, b) a half-baked love story, and c) an overexposed canine, maybe it can earn some praise that’s actually deserved.

You can read a full synopsis below:

Spring, 1958. 21-year-old Rose Pamphyle lives with her grouchy widower father who runs the village store. Engaged to the son of the local mechanic, she seems destined for the quiet, drudgery-filled life of a housewife. But that’s not the life Rose longs for.  When she travels to Lisieux in Normandy, where charismatic insurance agency boss Louis Echard is advertising for a secretary, the ensuing interview is a disaster. But Rose reveals a special gift – she can type at extraordinary speed.

Unwittingly, the young woman awakens the dormant sports fan in Louis. If she wants the job she’ll have to compete in a speed typing competition. Whatever sacrifices Rose must make to reach the top, Louis declares himself her trainer. He’ll turn her into the fastest girl not only in the country, but in the world!

But a love of sport doesn’t always mix well with love itself..

What do you make of this first shot?