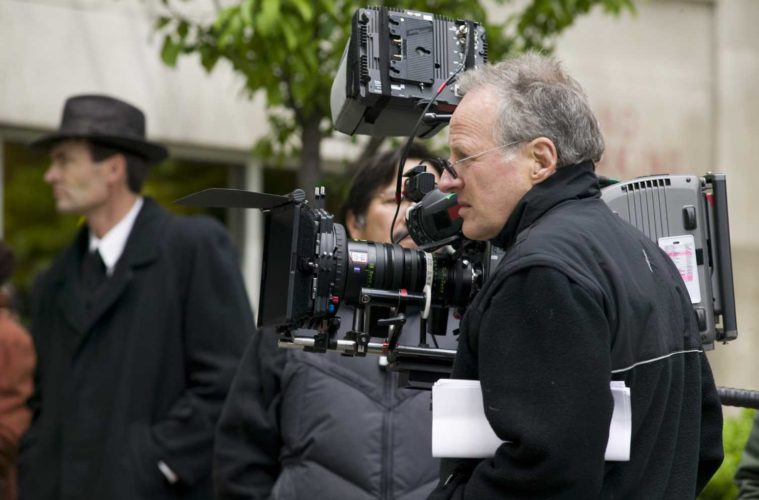 With it being nearly half-a-decade since we last saw a Michael Mann-directed feature film, anticipation is running high for his forthcoming Cyber, a thriller we hope will sneak into the 2014 release calendar by the end of this year, despite currently having a January bow lined up. Led by Chris Hemsworth, he described the project in detail last fall, but the general logline is that it’s a “cat-and-mouse international heist thriller,” one that “starts off in Chicago and ends up in Kuala Lumpur, in Hong Kong and in Jakarta.”

Following production that wrapped up last year, Mann is deep into the post-production process, showing off the film for the first time at a California test screening last night. We’ve got an exclusive first impression a reader sent in, as well as another one that cropped up. Both are positive, relating the style to Collateral and revealing the film is around two-and-a-half hours, with the shared criticism being that the cut could be shortened.

As a reminder, these are very early test-screening reactions, so the final product could be something altogether different — but for those who want a preview of what to possibly expect, look no further than below:

I’m a Michael Mann fan and I found the tone very similar to Collateral. It’s definitely a Michael Mann film, there’s no mistaking that. The tones are very blue and gritty. There were a few plot points that felt incomplete or out-of-sync, in particular, the start of a romance between Chris Hemsworth’s character and Tang Wei‘s character. The scene involving them was definitely a bit corny and occurred without any development of chemistry between them. Aside from the a few animations that were still in progress, the film did seem about 85% complete. The performances were good to great. Viola Davis was great. Tang Wei was hard to understand at times. Hemsworth was unexpected, but his performance was good. The film felt fresh and fitting of current headlines. The cut can be shortened a bit, but I felt that the run time was fine. Other viewers were complaining that it was too long during the survey. Overall, I thought it was excellent and I will definitely be watching it when it is released.

The movie has the makings of an exciting summer flick, but it doesn’t have the star power or franchise attachment to make it attractive to viewers. I think it can earn a better slot than a dump month like January, but it may be more successful with less competition. I was invited to a test screening and pleasantly surprised when I saw the invite was for the latest Michael Mann film, Cyber (title is tentative, I believe.)
The movie was shown in Orange, CA. and managed by Nielsen. We were told that we were the first audience to see the film. We were also warned about it not being complete. Some opening credit animation was still being worked on and the score/sound mixing wasn’t complete. Aside from that, it felt mostly finished.

It was a lengthy film – seemed to run about 2hrs and 30mins, but that’s an estimate. We couldn’t have any phones with us in the theater so my connection to time and the world was severed.

Without getting into major spoilers, which I won’t be offering up, be warned that minor spoilers are ahead via my impression and thoughts about the film.

First and foremost, this is definitely a Michael Mann film. I was curious how a film about cyber terrorism would fit with his current style. Cyber has a very similar look and feel to Collateral and Miami Vice. We get a large amount of handheld footage – it matches quite well to his other “new era” Michael Mann films. I was also pleasantly surprised that we got some classic Michael Mann shootouts. There was a surprisingly good balance of tense computer hacking moments and shootouts. I didn’t know if the content of the film would allow for any violence or action, but it definitely does. It has the same amount of action as Miami Vice, if not a little more. I don’t think many people could pull off a movie that mixes those two genres, but it worked for me.

The performances were definitely highlights – Hemsworth did a good job fitting that tough-guy archetype that Mann typically has in his non-period piece films. Viola Davis was especially fantastic – I can see her becoming one of Mann’s regulars. The score/soundtrack is hard to judge because it’s still a work in progress- no Audioslave though.

My biggest critique of the film is that, at its current running time it feels long and could use some trimming. There are establishing shots that feel redundant. However, this was the first test screening so I’d imagine that will be taken care of over the next several months. I definitely plan on seeing it again – I did enjoy the movie and would put it alongside Collateral and Miami Vice with style (as mentioned above) and enjoyment.

TL;DR – A good amount of action and solid performances makes this an enjoyable Michael Mann film akin to the style of Collateral and Miami Vice.

It did not come across like a January dump film too me and it’s worlds better than Transcendence. I’m a little surprised by the release date. It’s certainly no summer blockbuster, but it doesn’t fit the mold of a January film.
The thing with this film is it might not be too accessible to your average moviegoing audience. There’s probably a segment that just won’t connect to it. That and the film isn’t packed with huge names- although the cast is perfect in my opinion.
I would rank this as a middle of the pack film for Mann- not his best or worst. That being said, for me a middle of the pack Mann film is still much better than most other films that comes out. What I saw has a chance to be much better with some editing. I keep comparing it to style and tone of Miami Vice and Collateral because that’s what it most resembles and those films would be the easiest to compare it too. If you like those films, chances are you’ll dig this too. There are some great Michael Mann moments in this movie.