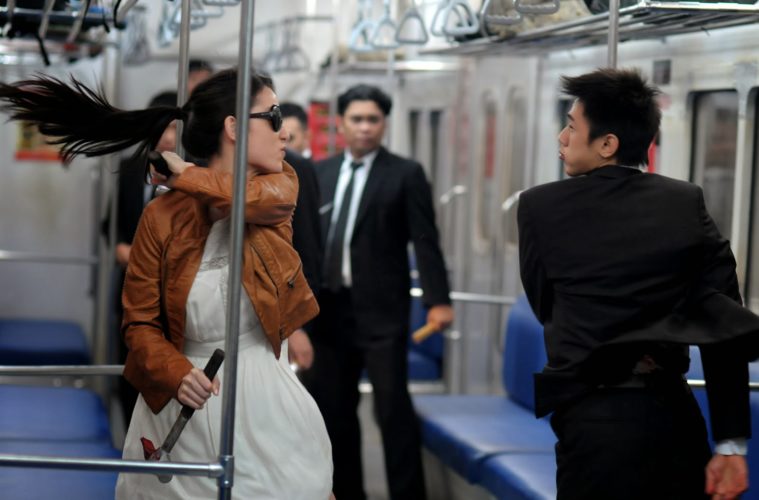 Less than twelve hours before its premiere in Park City, Sony Pictures Classics have unveiled a first domestic trailer for The Raid 2, Gareth Evans‘ much-anticipated sequel to his own 2012 Indonesian action extravaganza. It’s all about the first taste, and with a first teaser and longer international trailer having already been released, concern about over-saturation or spoiled scenarios (a common deterrent to watching previews in the first place) is understandable — but, lest we forget, the film runs for 148 minutes, a good majority of which we expect to be filled with an amped-up iteration of the first film’s wreckage of people and places. Otherwise, what’s even the point?

Bigger scale seems to have been one of the writer-director’s central concerns, as evidenced by the briefly glimpsed additions: a prison yard, parking lot, restaurant, subway, hotel, even a freeway chase — all in all, a geographic repertoire that might erase some of the claustrophobia people took as either a boost or detriment to its predecessor. If The Raid 2 is no more than a feature-length version of what’s seen here — with extended action sequences, mind — I don’t think anyone who bothers seeing it in the first place is in much of any position to complain.

Watch the trailer below (via Yahoo!), and have a glance at some GIFs that you can put on your Xanga or whatever is being used nowadays: He thought it was over. After fighting his way out of a building filled with gangsters and madmen – a fight that left the bodies of police and gangsters alike piled in the halls – rookie Jakarta cop Rama thought it was done and he could resume a normal life. He couldn’t have been more wrong.

Formidable though they may have been, Rama’s opponents in that fateful building were nothing more than small fish swimming in a pond much larger than he ever dreamed possible. And his triumph over the small fry has attracted the attention of the predators farther up the food chain. His family at risk, Rama has only one choice to protect his infant son and wife: He must go undercover to enter the criminal underworld himself and climb through the hierarchy of competing forces until it leads him to the corrupt politicians and police pulling the strings at the top of the heap.

And so Rama begins a new odyssey of violence, a journey that will force him to set aside his own life and history and take on a new identity as the violent offender “Yuda.” In prison he must gain the confidence of Uco – the son of a prominent gang kingpin – to join the gang himself, laying his own life on the line in a desperate all-or-nothing gambit to bring the whole rotten enterprise to an end.

The Raid 2 will open in limited release on March 28.

Based on this next trailer, would it seem that Evans and company have stepped up the chaos of their first film?