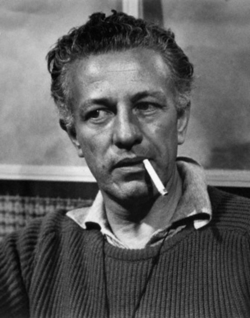 THR has the exciting news that Oscilloscope will release We Can’t Go Home Again, a movie from the influential, late director Nicholas Ray. Originally shot in the early ’70s, this documentary follows Ray as he teaches “filmmaking to a novice crew” — who were his students at SUNY Binghamton — which he did during the making of a feature. Its premiere was held at the Cannes Film Festival in 1973, although he kept shooting additional parts and editing the whole thing up to his death in 1979. This late release more or less makes it his final film, an honor previously held by Lightning Over Water, a documentary he co-directed with Wim Wenders. An appearance at Venice and NYFF is expected, with a general opening set for this fall.

Also coming to us from Oscilloscope in the near future is a documentary on Ray, titled Don’t Expect Too Much. Directed by his wife, Susan Ray, it “explores Ray’s approach to directing and the relationship between his life and art in the latter years of his life.” In addition to playing at festivals and special engagements, both this and Home will be widely available on various formats next year.

The name Nicholas Ray isn’t one that’s often mentioned alongside some of the bigger filmmakers of his era, but the man’s work has stood the test of time. Some of his offerings include Rebel Without a Cause, Bigger Than Life, Johnny Guitar, and In a Lonely Place, all films that have had an influence on some of today’s most acclaimed directors, including Martin Scorsese; he briefly covered him in his excellent documentary A Personal Journey with Martin Scorsese Through American Movies. Part of me hopes that these projects will help modern audiences in appreciating his work — the release, alas, may not be big enough for that to truly happen, but this is still a great thing to hear.

Are you a fan of Nicholas Ray, and would you like to see his final film? How about this new documentary?