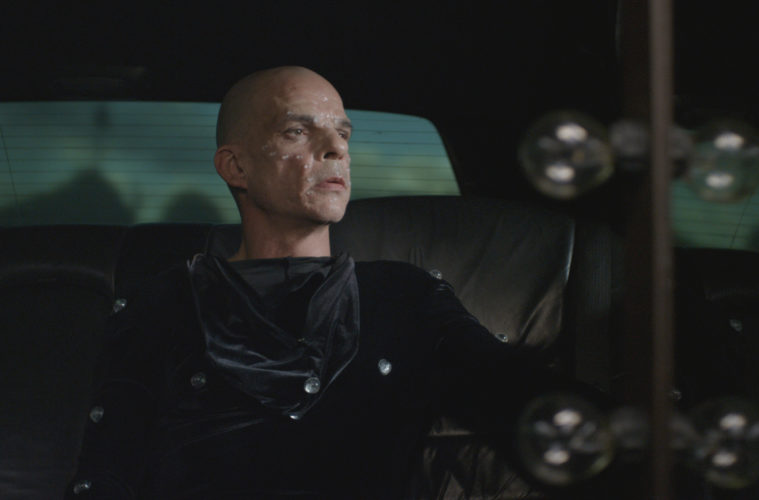 Fantastic Fest is truly a unique event. There’s plenty of room for arthouse films and, on some occasions, the big awards players, but one theater that hosts There Will Be Blood might, the next night, see the premiere of something you’d catch on a weird cable station at 3 A.M. You don’t get that at Venice.

Such a programming mentality is reflected in the second set of titles: We have Leos Carax‘s acclaimed Holy Motors, Rian Johnson‘s Looper, horror anthology The ABCs of Death (as if it could premiere anywhere else), Sinister, and a whole batch of films I’d never heard of up until now. It’s wonderfully eclectic, and it only makes me wish I could be there come late September.

See the lineup below:

Twenty-six directors. Twenty-six ways to die. Co-produced by Drafthouse Films, and finally ready to be unleashed-see what happens when you give more than two dozen of the most brilliant filmmakers from around the world free reign to indulge their creative impulses and black humor. From A to Z, it’s got something for every genre fan and is like nothing you’ve ever seen before.

In a small Massachusetts community, three Halloween-obsessed households transform into neighbor-terrifying supernatural wonderlands in this surprisingly touching documentary from the director of BEST WORST MOVIE.

Regional Premiere with director Jason LaPeyre in person
Director – Jason LaPeyre, 86min
Things quickly spiral out of control when a policewoman must protect her recently comatose suspect from a violent crime boss who has cornered them in an isolated hospital wing.

Innovative Korean genre directors Kim Ji-Woon (A TALE OF TWO SISTERS, A BITTERSWEET LIFE, THE GOOD, THE BAD AND THE WEIRD, I SAW THE DEVIL) and Yim Pil-Sung (HANSEL & GRETEL) turn their imaginations to apocalyptic sci-fi with this three-part omnibus film which outlines three possible ways in which the world goes kaput.

When a driver for a powerful congressman picks up his and his boss’s daughter from school, he’s annoyed to find himself being pulled over. But this alleged cop, far from an officer of the law, sets in motion a downward spiral of kidnapping, murder, deceit and deep depravity.

A double shot from Japanese up-and-comer Hajime Ohata. Blending elements of Kiyoshi Kurosawa and Shinya Tsukamoto with just the right amount of kaiju monster battles, Ohata is quickly building a reputation as one of Japan’s brightest new talents.

US Premiere with director Adrián García Bogliano in person

Fantastic Fest veteran Adrián García  Bogliano (COLD SWEAT, PENUMBRA) returns with his latest supernatural horror.  When two children who went missing while exploring a cave are found, it quickly becomes apparent something evil has come home with them.

North American Premiere
Director – Leos Carax, 116min
While following a day in the life of Mr. Oscar as he attends several appointments, things quickly unravel and spiral out of control, abandoning all sense of logic or sanity.  Fans of Carax’s ‘Mierde’ segment of Fantastic Fest 2008 hit TOKYO! will be right back at home.

In the futuristic action thriller LOOPER, time travel will be invented – but it will be illegal and only available on the black market.  When the mob wants to get rid of someone, they will send their target 30 years into the past, where a “looper” – a hired gun, like Joe – is waiting to mop up.  Joe is getting rich and life is good… until the day the mob decides to “close the loop,” sending back Joe’s future self for assassination. The film, starring Bruce Willis, Joseph Gordon-Levitt, and Emily Blunt, is written and directed by Rian Johnson and produced by Ram Bergman and James D. Stern.

You’ve seen the movie, now hear the story of the Amityville haunting from someone who lived it. Regardless of the source, it’s clear there was darkness in that Long Island house.

NO REST FOR THE WICKED (2012)
Regional Premiere
Director – Enrique Urbizu, 104min
A dirty cop who tries to cover up a crime stumbles upon a massive criminal conspiracy.  NO REST FOR THE WICKED swept the Spanish Goya awards this year with an electrifying performance by lead actor José Coronado.

OUTRAGE BEYOND (2012)
US Premiere
Director – Takeshi Kitano, 112min
As Japanese police launch a full-scale crackdown on organized crime, it ignites a national yakuza struggle between the Sanno of the East and Hanabishi of the West.  What started as internal strife in director Takeshi Kitano’s OUTRAGE, has now become a nationwide war in his latest film OUTRAGE BEYOND.

SINISTER is a frightening new thriller about a true crime novelist who discovers a box of mysterious, disturbing home movies that plunge his family into a nightmarish experience of supernatural horror.

World Premiere with Dolph Lundgren and Scott Adkins in person

Surviving Unisols Luc Deveraux and Andrew Scott battle anarchy to build a new order ruled by Unisols without government oversight. To accomplish this, they weed out the weak and constantly test their strongest warriors in brutal, life-and-death combat.

Director – Kristina Buozyte, 124min
A scientist with a neurological research team volunteers to experiment with a new technology which will allow him to access the thoughts of a coma victim.

WARPED FOREST, THE (2011)
US Premiere
Director – Shunichiro Miki, 81min
Shunichiro Miki delivers a shot of utter madness. Penis guns! Nipple monsters! A giant girl running a very small shop! This quasi-sequel to THE FUNKY FOREST more than lives up to the weird factor of its predecessor.

Is this an impressive assortment for Fantastic Fest? How does it compare to prior years?