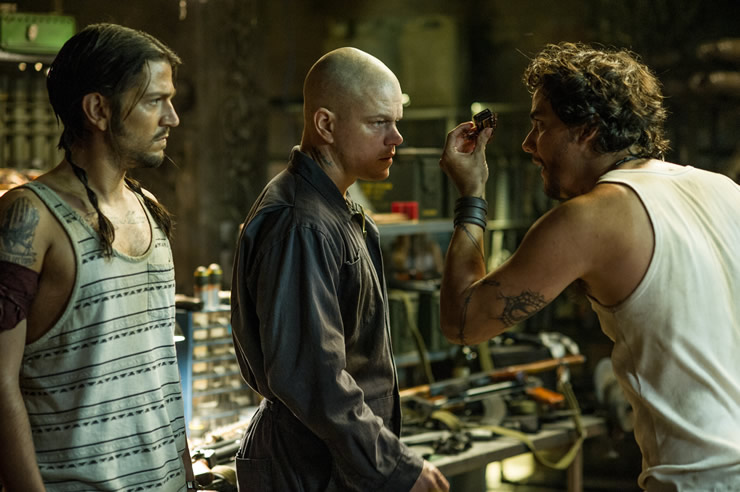 After much anticipation, last night finally brought our first look at footage from Neill Blomkamp‘s District 9 follow-up Elysium as the debut trailer landed. Doing enough to tease the basics of this story and the expansive world, count us excited as to what this director has to offer for his sophomore effort. While the first trailer centered primarily around Matt Damon, we’ve now got new images and information opening up more from the story.

Revealed over on Sony’s official site, one can see new stills of our supporting cast, as well as information regarding each of them, including a few who were absent from the trailer. We can now see that William Fichtner is relegated to Earth as the CEO of Armadyne, a company who does contract work for Elysium, while Diego Luna plays Damon’s childhood friend, and much more. Head on over to the site to see more and check out the new images, with one coming from EW, below for the film also starring  Jodie Foster, Sharlto Copley, Wagner Moura and Alica Braga. In the year 2159 two classes of people exist: the very wealthy who live on a pristine man-made space station called Elysium, and the rest, who live on an overpopulated, ruined Earth. Secretary Rhodes (Jodie Foster), a hard line government official will stop at nothing to enforce anti-immigration laws and preserve the luxurious lifestyle of the citizens of Elysium. That doesn’t stop the people of Earth from trying to get in, by any means they can. When unlucky Max (Matt Damon) is backed into a corner, he agrees to take on a daunting mission that if successful will not only save his life, but could bring equality to these polarized worlds.