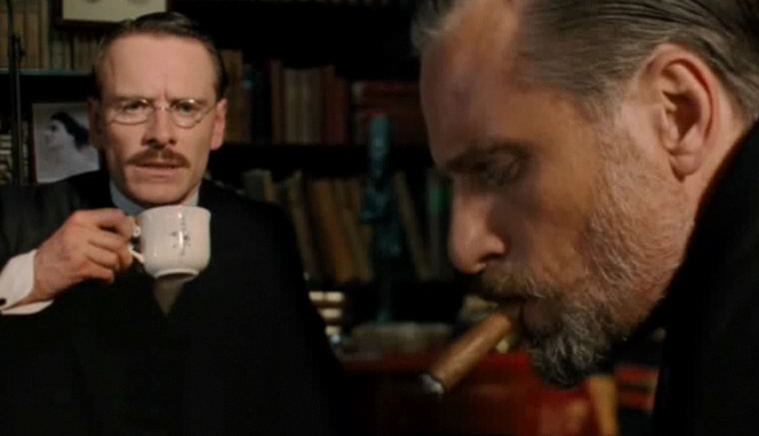 After some below subpar footage showed up a few days ago, we now have the official trailer for David Cronenberg‘s A Dangerous Method. Written by Christopher Hampton – who is adapting his own play, The Talking Cure – it stars Viggo Mortensen as Sigmund Freud, Michael Fassbender as Carl Jung, and Keira Knightley as Sabina Spielrein.

Focusing on the love triangle that formed between the three figures before the start of World War I, it’s the third collaboration between Mortensen and Cronenberg, who previously worked together on A History of Violence and Eastern Promises. The trailer gives off a vibe more in line with those two films than the director’s previous, horror-oriented filmography — this indicates (to me, at least) that he’s found a new path of sorts in his career.

The quick preview already tells us that he’ll be getting some of the best performances out of these actors, which shouldn’t come as a surprise to those who are familiar with his work. Direction wise, it definitely looks like something from Cronenberg, with the exception of one thing: the cinematography. This happens to be my biggest concern about the movie so far, because it almost makes the film look like a TV movie. I’m really hoping that this isn’t indicative of that aspect in the final product, because I could see it being a problem. Everything else looks good, though, and this could very well end up being a big winner for its actors come awards season.

Watch it below or head to the movie’s official site (via CinemaBlend/Empire):

Also starring Vincent Cassel, A Dangerous Method opens at the end of this year via Sony Pictures Classics, with a premiere at the Venice Film Festival confirmed.

What do you think of this trailer? Do you feel that it gives off a Cronenberg vibe?