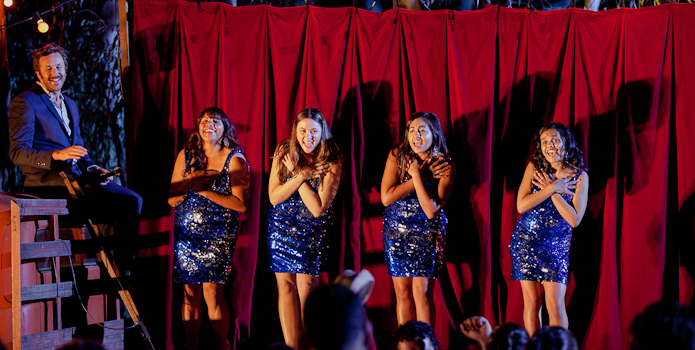 Since you’d already recognize him from Bridesmaids or a couple of Girls episodes, now is the time for Chris O’Dowd to lead a movie of his own. Although The Sapphires is probably not going to be “big” — not that I’m fond of box office prognostication in the first place, much less months before a film’s release — our first trailer and some Cannes reviews still get things off to a proper start.

The former presents all those ingredients atypical of your musical biopic — the film, as a matter of (ahem) fact, is based on a true story — which, for good or bad, is also accompanied by a couple of legitimately funny moments and surprising drama. Director Wayne Blair may even have a long-term grasp on all those elements; if I’m right, The Sapphires could be a pleasant little excursion into the crazy period of late ’60s Vietnam. I didn’t expect that much.

The trailer and some stills can be seen below (via TIFF): Synopsis: Plucked from obscurity in a remote Australian mission school in 1968, four talented young Aboriginal girls are formed into a dynamic singing group and sent to Vietnam to entertain the troops.

Is this first trailer enough to provide some sort of interest in The Sapphires?