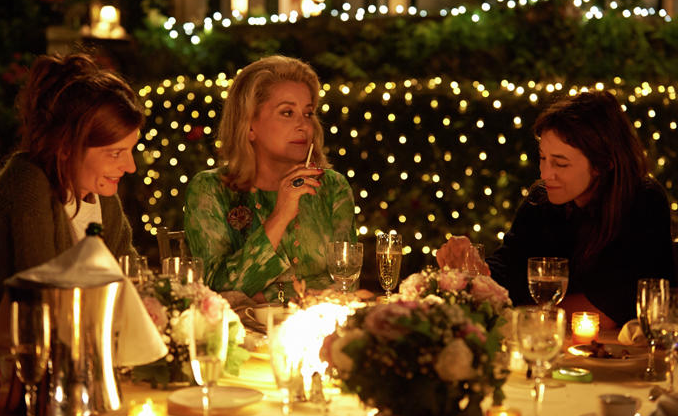 If you knew nothing about a film except that it involved Catherine Deneuve, Charlotte Gainsbourg, and Chiara Mastroianni, would curiosity be piqued? I’m often of the mind that three great leads are enough to elevate material (even slightly), and not knowing a single thing about Three Hearts, plot- or form-wise, before viewing this trailer thus didn’t matter one bit.

Benoît Jacquot (Farewell, My Queen) directs and, with Julien Boivent, co-writes the picture, which follows the tensions that mount between two sisters (Gainsbourg, Mastroianni) when both earn the affections of a ruggedly handsome fellow (Benoît Poelvoorde). Certain aspects of the trailer are a bit strained, though first reviews out of Venice have pegged Three Hearts as a respectable effort, better yet one that takes advantage of its cast — including the art-imitates-life mother-daughter pairing of Deneuve and Mastroianni. Watching everyone together should offer its own worthwhile pleasures.

The story starts simply enough: a man misses his train in a small provincial town and needs to find a hotel. He meets a woman in a bar and asks her for help — and to take a walk with her. Romance seems inevitable, but a missed assignation in Paris sends the would-be lovers on their separate ways despite the clearly special connection between them.

Marc (Benoît Poelvoorde) returns to his life in the tax office, Sylvie (Charlotte Gainsbourg, also appearing at the Festival in Samba) moves to the States. Then, one day, Marc meets Sophie (Chiara Mastroianni). They are soon deeply in love, living together, and planning to marry. The hitch: unbeknownst to our hero, Sylvie and Sophie are sisters, and very close ones at that.

Jacquot lets us in on the secret upfront, leaving the bewildered Marc to twist in the wind. The tension only builds once things are revealed, resulting in some explosive moments and a lingering uncertainty as to where things will end up. Jacquot meticulously observes all of the foibles of his various characters, almost taunting us to decide what is morally correct in a situation like this.

Three Hearts will play at TIFF and has been acquired for U.S. distribution by Cohen Media Group.

What do you think of this trailer? Does the three-person combination speak to you?