Cannes Review: Where Is Anne Frank is an Imaginative Yet Trite Animation 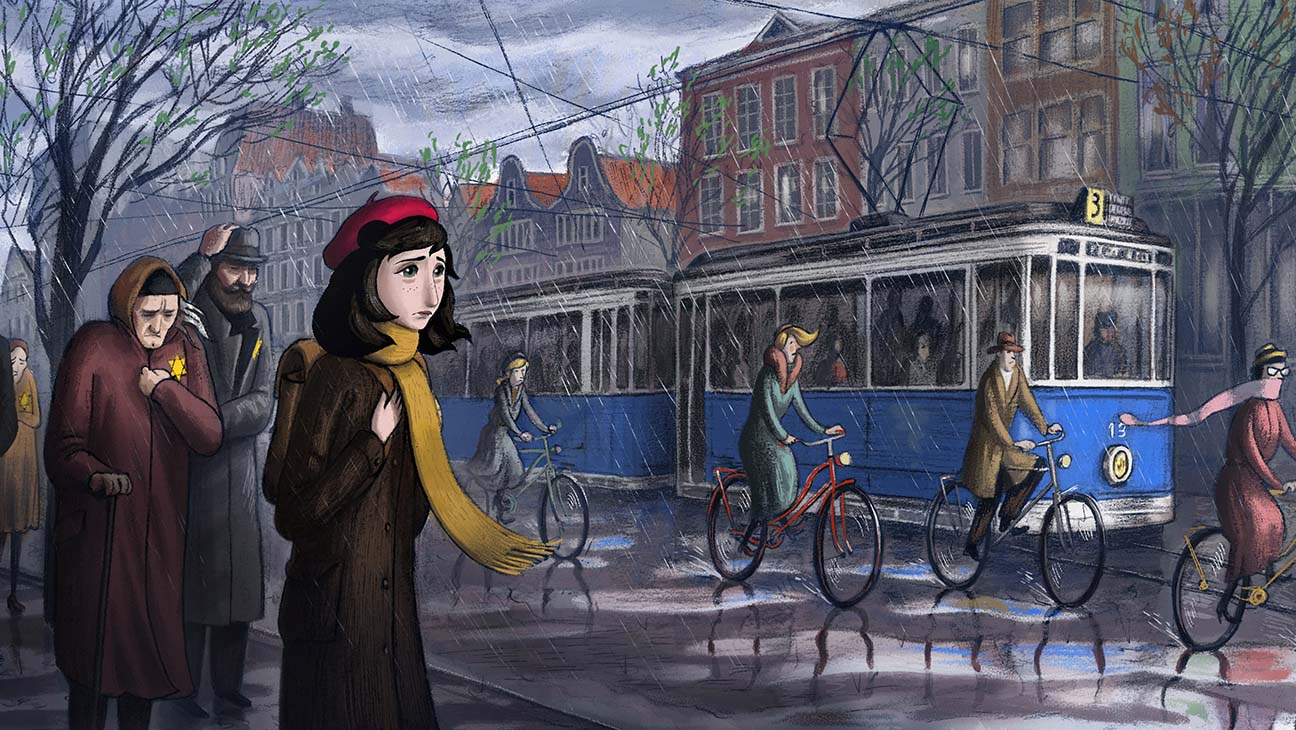 The Israeli director Ari Folman rose to international fame at Cannes, where his feted Waltz With Bashir was a rare animated film that competed for the Palme d’Or. Its daring use of rotoscope imagery to explore trauma in the Lebanon War might have led to assume something equally provocative in exploring the horrors of the Holocaust.

Where is Anne Frank, however, premieres out of competition and, although led with good intentions, it is a film laden with heavy-handed storytelling and a tendency to didacticism that would make Brecht blush. It may be a film for children, and one that tries to sincerely link the darkest moments of history with current political issues for a younger generation, but Folman, the child of Auschwitz survivors, makes some big missteps.

The opening frames show a rainy near future Amsterdam, with a line of tourists waiting for entry to the Anne Frank Museum––the former annex on Prinsengracht where Anne, her family, and their acquaintances the van Pels survived for more than a year before their eventual capture. The tourists fail to notice the row of makeshift tents housing the homeless and refugees outside the museum, a metaphor for another era in which citizens don’t care for their fellow man.

As the camera ventures into the museum itself, from the diary by magic emerges Kitty (voiced by Ruby Stokes), the imaginary friend Anne (Emily Carey) wrote to, appearing like the genie from Disney’s Aladdin. Kitty has the face of Ava Gardner and the red hair of Veronica Lake and her imagined correspondences with Anne are brought to life in vivid imagery, much of which is 2D animation placed on top of stop-motion backgrounds.

Folman is collaborating with the foundation of Anne’s father, Otto, and no doubt the museum itself in rendering accurate the locations of Anne’s childhood, though the look more akin to The Triplets of Belleville than the nightmarish imagery of Waltz With Bashir.

Much like the Pensieve in the Harry Potter series, we are transported through the book to Anne’s memories from the early 1940s. Folman imagines the city as a cold, dark place; the Nazis lurk around looking like extra-terrestrial Marvel villains, while in hushed voices Anne and her family discuss rumors of what’s going on in the “East.” a place from where no one returns.

Folman is best in the family-entertainment mode when he’s breathing visual life into Anne’s flights of imagination, like her colorful dreams of Greek gods battling the Nazis for the Jews’ freedom. Chillingly, in her fantasies, the Nazis’ lair is not Berlin but the gates of Auschwitz itself.

The present-day Kitty soon finds herself at the center of a nationwide €100,000 manhunt after she accidentally steals the diary from its shrine in the museum (a police sergeant gruffly calls it Holland’s greatest cultural treasure since Rembrandt). When she walks out of the museum, she discovers half the district is named after Anne––a theater, school, hospital. And yet Kitty keeps exploring, searching, as the title makes clear, for the writer herself. It’s at the Anne Frank library that Kitty finally learns that Anne was murdered at Bergen-Belsen.

But Folman’s modern-day conceit becomes bogged down in its own convolution. Kitty soon joins forces with a vagabond homeless teen, Peter (Ralph Prosser), drawn like a cross of the Artful Dodger and a Justin Bieber on a skateboard. He robs rich foreigners who visit the museum and, in a twist a little too on-the-nose, spends the money helping asylum keepers he protects in a safehouse from the immigration cops. Then Kitty and Peter fall in love in an awkward and unnecessary fashion, what is supposed to be teaching younger viewers?

If the film’s title is a query or statement––note the lack of question mark––pointed toward its audience, it’s surely saying Anne’s legacy is not a single book or in museums or buildings, but a positive attitude toward others. That’s admirable. But as Kitty and Peter make a final stand against the immigration police, can Folman really draw flippant comparisons between the Nazis to Dutch or Western immigration policy? Making a children’s film about the Holocaust is a brave and commendable ambition, but the horrors of the Nazi era are so harrowing that the message at the center of Folman’s film feels trite.

Where Is Anne Frank premiered at Cannes Film Festival.