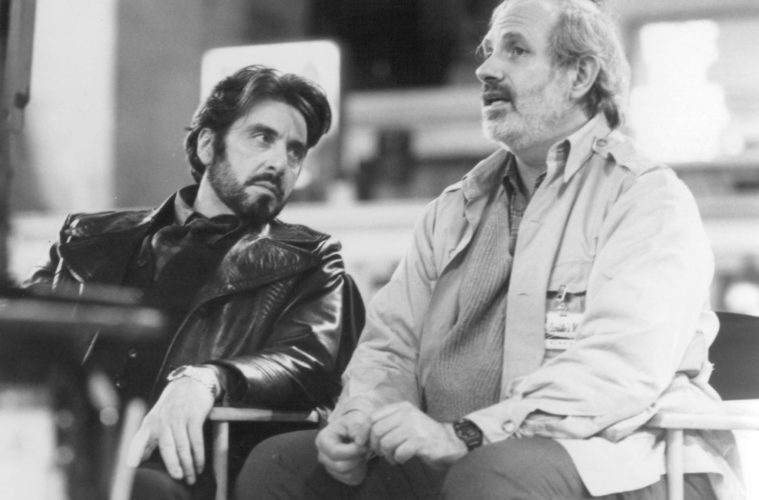 You watch Scarface for the first time in almost a decade this past weekend and, then, at the drop of a hat, news like this hits your virtual doorstep. In letting his extraordinary career take another unexpected turn, Brian De Palma — finally back in the next few months with a thriller, Passion — has opted to reunite with Al Pacino on the latter’s Joe Paterno film, now tentatively-titled Happy Valley. Again, not the sort of thing a fan would ever expect to hear, but I guess this has similar shades of great rises and spectacular falls — in some manner of speaking. I doubt that as many rappers will have this film’s poster hanging in their mansions thirty years down the line. The project had been set into motion this past fall, when Pacino had optioned rights to Joe Posnanski‘s extensive biography, Paterno, a tome originally envisioned as a traditional portrait of college football’s most legendary coach; the scandal involving Jerry Sandusky‘s sexual misgivings (and Paterno’s failure to take proper action) broke out in the midst of writing, a front-row sight was unexpectedly granted to the author. With that, it’s just as (if not more) important to have this extensive breadth of content that comes before recent explosions in the media. Being able to implement as much into its narrative, Happy Valley would, ideally, utilize finer details to tell a story with altogether finer emotional impact than just any other project about this man.

De Palma can do big emotional stuff — regardless of what his (wrongheaded) critics have alleged for decades — but more grounded material is… interesting territory for him, historically-speaking. That sort of unfamiliarity is only one part of what makes his signing so out-of-left-field, and nothing else helps answer why, exactly, he’s angling toward a Joe Paterno film as his next project. (Besides the fact that he’s been dropping more projects than adding nowadays.) Since, by all accounts, he and Pacino worked well together on Scarface and Carlito’s Way, it could just come down to wanting another shot at collaboration. In which case, fine. I’m merely glad he’s continuing to work.

What do you think of De Palma and Pacino getting back into cahoots, and on this project?