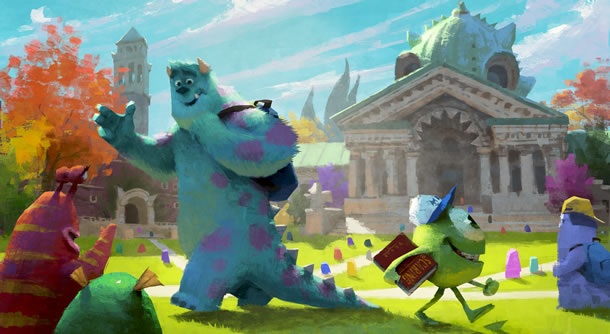 Pixar play their stories close to the chest — seeing Brave over a week before its release made all bear jokes moot for longer than I’d like — so, even with that headline, don’t hold your breath for a Wikipedia-length rundown of Monsters University. It’s still more than four teasers.

These little tidbits come from EW, who briefly chatted with Billy Crystal about he and John Goodman‘s return to Mike and Sully, respectively. While we’ve long known (thanks in no small part to the title) that they’d be heading off to school in this prequel, only now are we getting a peek at what their education brings. The key idea? Awkwardness. With the both of them being college freshmen around 17 or 18, “neither monster has fully graduated from his awkward phase yet.”

We’ll also get to see “the raucous monster fraternity world,” but the two heroes are actually, according to Crystal, “in the same fraternity where they have this scare competition — like Greek Games in college.” From there, it sounds as thought Monsters University becomes an assemble-the-team sort of deal; the actor even compares it to Revenge of the Nerds.

A simple idea, but Pixar often thrive on those. (Up is a wonderful film, but, before its release we were only told that followed a man who attaches balloons to his house and goes on a treasure hunt.) My reservations about the film’s “necessity” or freshness still remain, sure; things are nevertheless off to a good start.

Going off Crystal’s comments, do you have any new perceptions of Monsters University?