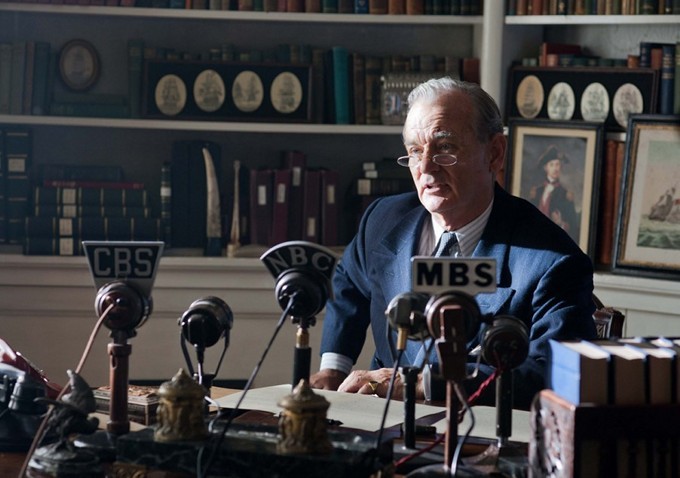 Being both a history nerd and a Dutchess County native, you can count me as unreasonably interested in Hyde Park on Hudson — probably more than anyone else right now, as a matter fact. (Unless we’re talking about Roger Michell.) But I do honestly think that interest will begin to generate as we get closer and closer to its end-of-2012 release. After all, this thing’s got a great cast, some fascinating and saucy material, and plenty of Franklin D. Roosevelt‘s scenic Hyde Park home. The perfect ingredients for a winter release.

And my excitement is only fueled by a new set of photos released by Focus Features (via ThePlaylist), all of which show off Bill Murray (FDR), Laura Linney (his cousin and mistress, Daisy), Olivia Colman (Queen consort Elizabeth), Olivia Williams (Eleanor Roosevelt), Samuel West (King George VI), and Elizabeth Wilson (Roosevelt’s mother). They’re all looking rather spot-on, if I do say so myself — but it’s all going to be about Murray when the actual film hits on December 7th.

Take a look at the photos above and below: The best Bill Murray-related news of the day, however, might actually relate to Ghostbusters 3. Not something you’d normally expect, except when I refer to an interview Dan Aykroyd conducted with The Telegraph (via /Film), wherein the actor and writer indicated that, after years of stagnant development and half-baked promises, the project might finally be dead. Yes, all because of Murray‘s long-held refusal to do the project.

Read his quote on its prospects below:

“I honestly don’t know. At this point it’s in suspended animation. The studio, the director Ivan Reitman and Harold Ramis feel there must be a way to do it, but Bill Murray will not do the movie. He doesn’t want to be involved. He’s got six kids, houses all over America. He golfs in these tournaments where they pay him to turn up and have a laugh. He’s into this life and living it. I know we’d have a lot of fun [but] I can’t be mad at him. He’s a friend first, a colleague second. We have a deep personal relationship that transcends business and he doesn’t want to know.”

Are you impressed with the work on display in these photos? Would the death of Ghostbusters 3 leave you bummed?