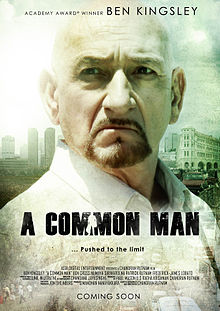 Ben Kingsley is the kind of actor that I like to keep tabs on, which makes news of an already-shot project a little surprising. As Deadline tells us, Myriad Pictures will distribute A Common Man, a remake of the 2008 Indian thriller A Wednesday that stars the Academy Award winner and Chariots of Fire‘s Ben Cross.

Written and directed by The Road from Elephant Pass helmer Chandran Rutnam, the film follows a man in Sri Lanka (Kingsley) who “has planted 5 bombs in the politically-scarred city that are set to explode unless four major terrorists are immediately released from prison.” He “calls in his demands to the Deputy Inspector General of the Colombo Police Department (Cross),” and this “sets in motion an ideological and deadly confrontation between the truth and duty.”

Sounds like it has the makings of a solid thriller, while the inclusion of Kingsley and Cross sets a certain expectation for the quality of performances. Though Rutnam is a bit of an inexperienced director, having only helmed two films, he should know a thing or two about good filmmaking — the guy was a production supervisor on Temple of Doom. (Admittedly, that’s not the best Spielberg movie to gain experience from, but it’s better to work with him than almost any other living filmmaker.) Distribution in place means that we should expect to see it next year, and you can always check back for more on it when materials arrive.

Do you consider yourself a Ben Kingsley fan? How does the plot description of A Common Man sound to you?