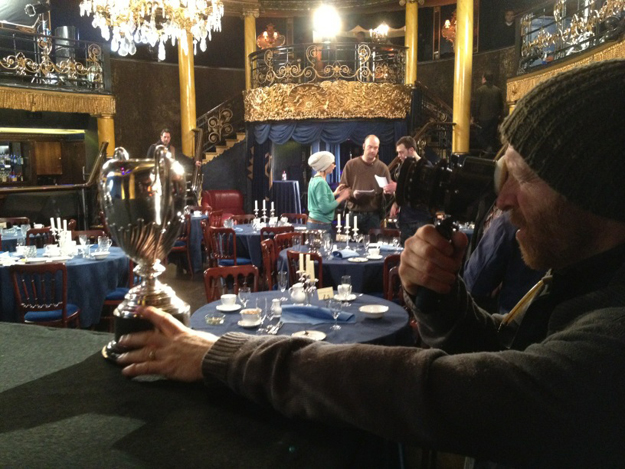 Ron Howard‘s Rush, which is currently in the middle of production, hasn’t been generating a whole lot of buzz as of late — somewhat surprising for a project that re-teams the writing-directing duo of the Oscar-nominated Frost/Nixon. Howard‘s less-than-impressive follow-ups — Angels & Demons and The Dilemma — are probably part of the reason why the director’s name is beginning to carry less weight. And perhaps the fact that Morgan‘s most recent outings — Hereafter and 360 — have also been his most divisive has started to chip away at his prestigious consistency as well.

Nevertheless, I’m maintaining a relative interest in the film, which will have Daniel Brühl (Inglourious Basterds) playing Formula 1 racer Niki Lauda. Chris Hemsworth (Thor), Olivia Wilde, and Christian McKay (Me and Orson Welles) are also on board the cast.

Coming Soon has compiled a series of photos from the film’s set which prove that, in addition to overseeing the production, Howard is doing his very best to build the buzz meter on his end — both the above and below stills, as well as the rest of the crop over at Coming Soon, come directly from Howard‘s Twitter account. Below, you’ll also find a full-length synopsis of Rush, which delves rather heavily into the events the film will track. Set against the 1970’s golden age of Formula 1 racing, “Rush” portrays the fast-paced and exhilarating true story of two of the greatest rivalries the sport has ever witnessed – that of James Hunt (Chris Hemsworth) and Niki Lauda (Daniel Brühl) and their illustrious Formula 1 racing teams, McLaren and Ferrari. A privileged, charismatic and handsome English playboy, Hunt could not be more different from his reserved and methodical opponent, Austrian born Lauda. “Rush” follows their personal lives both on and off the track and charts their rivalry from its inception in Formula 3. Here they competed viciously against each other until Lauda’s business acumen and surgeon like precision behind the wheel propelled him all the way to Formula 1; eventually landing him the number one spot at Ferrari. However it was not long before rambunctious golden boy Hunt fought his way into Formula 1, and into the hearts of a nation, dramatically seizing the championship from Lauda and proving to the critics, and more importantly himself, that there was real substance beneath the stylish exterior.

Do you have any early hunches regarding Rush?