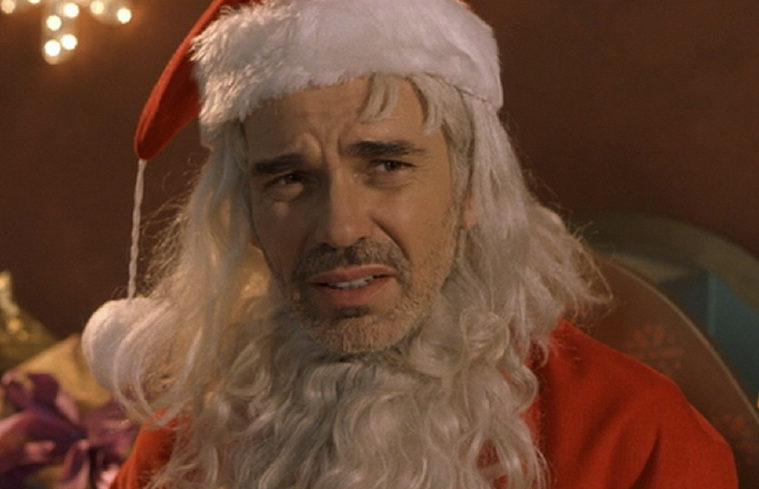 Against some of my own pessimistic expectations, it looks as though Bad Santa 2 is about to become a reality. Eight months after screenwriters were hired (or, at least, brought on to do work) Billy Bob Thornton told ThePlaylist that the long-delayed, oft-quiet sequel is kicking into gear in some truly productive ways. With rewrites currently ongoing at the moment — a result of the team having “a few little things we wanted to take away or add” — a fall shoot and Christmas 2013 release is to be expected. If you want to feel old and decrepit, that would get it out there ten years after the first film’s release. Unreal.

The actor also dished a little more on his next directing project — an Angelina Jolie-inspired drama entitled And Then We Drove — telling the outlet that, for the most part, it’ll be comprised of himself and one other actor; other characters and performers are “going to be kind of in and out” during this road trip story. The plan is to shoot it this summer, which would fit nicely with his Bad Santa 2 schedule, should everything go accordingly.

ThePlaylist also uncovered some Steve Coogan-related tidbits in the latest Vanity Fair, thus shedding light on both an Alan Partridge movie and a sequel to The Trip. On the former topic, we now know that the clueless sports reporter will be back in front of cameras this summer, in theaters 2013, as Pete Baynham (Borat) and In the Loop director Armando Iannucci have been crafting the script alongside the star. The plot was not expounded upon too greatly; Coogan only revealed that the project centers on “quite a large event in a small town” in which his character isn’t actually the lead, but “an unwilling participant.” We’ll have to wait and see what comes of that.

Most of you might be interested in the Trip follow-up, however. So I’m sorry to say that there isn’t much to take away here, other than Coogan‘s promise that the Italy-bound picture will be “retracing the steps of Shelley and Byron, with all the attendant pompousness and portent.” With Michael Winterbottom and co-star Rob Brydon making a return, I would be honestly, completely happy with just a little more riffing between two English comedians.

Jumping back into actors-turned-directors: James Franco did his typical James Franco thing last week, surprising us with the announcement of an in-production, completely incognito adaptation of Cormac McCarthy‘s Child of God that he’d lead with Tim Blake Nelson. Things have been moving along in the not-so-lengthy time since at a quiet, hopefully productive pace, and local West Virginia newspaper The Pocahontas Times managed to get this out of producer Vince Jolivette as production continues: “We’ll hit film festivals in six to eight months and then it’ll be out in theaters next year.” Quick, yes, but that’s just the pace at which Franco works. Here’s hoping it can still manage to leave a bigger impression than The Broken Tower.

In terms of additional casting, WeGotThisCovered has heard that relative unknown Scott Haze will take a leading role, playing Lester Ballard, while True Blood‘s Jim Parrack has the part of Deputy Cotton. [ThePlaylist]

Here’s an unusual teaser the latter made for Child of God:

Will you be up for Bad Santa 2? Or, for that matter, any of the films discussed here?