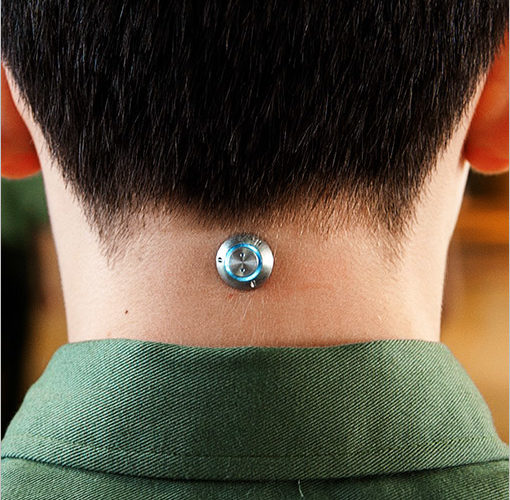 The Ender’s Game production hasn’t completely shied from some pre-release peeks, with the crew having set up a Tumblr page that, while not visually loquacious or anything, gives a few here-or-there hints as to the production design being employed by Gavin Hood. No matter what your anticipation for the film may be, though — I’m mildly interested, myself — this latest item has to be a tad more interesting than what’s been supplied thus far.

We have a behind-the-shoulder shot of a strange, Apple-like device located on Ender’s (Asa Butterfield) neck that would be, according to EW, a chip “used by Colonel Hyrum Graff (Harrison Ford) to monitor Ender’s actions and emotions on Earth — it’s what lets the Battle School know that Ender is the chosen child.” The shot itself — all a neophyte like myself can focus on — looks quite nice, speaking purely in terms of framing and cinematography, but I obviously hope to get more out of Ender’s Game than nice form.

Take a look at the image below, along with some other production shots: As a fan or non-fan of Orson Scott Card’s novel, does this photo get your anticipation flowing?