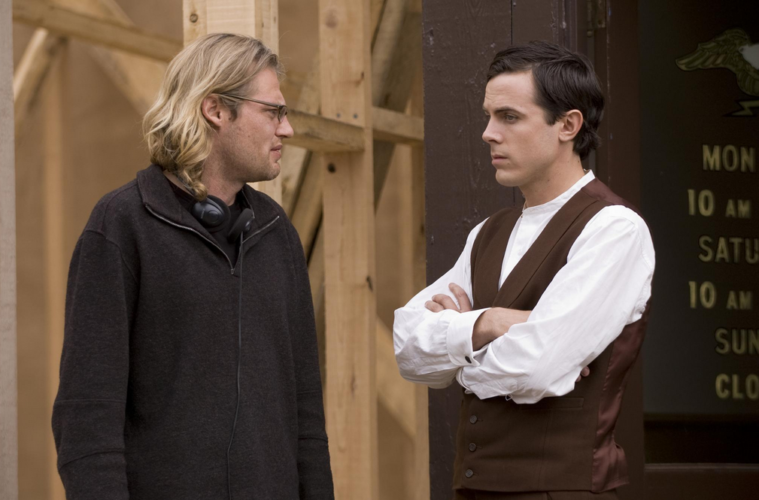 After months of behind-the-scenes efforts, this weekend will bring the start of Jamieson McGonigle‘s Jesse James Revival, a fan-led initiative to bring Andrew Dominik‘s The Assassination of Jesse James by the Coward Robert Ford back to the big screen — as it was always meant to be seen, and, too, in the most pristine conditions available. Although sites such as this have been working to bring further notice to what, hopefully, will become a nation-wide series of theatrical presentations, some of the most valuable encouragement has come from none other than the film’s writer and director, Andrew Dominik.

Yours truly had already spoken with him in March for entirely different reasons, but so ubiquitous is his 2007 western that it nevertheless had to come up at the time — little did we realize, however, that minor talk of revisiting the film would become the basis of our next conversation. Below, one can also read his thoughts on the whole enterprise, different cuts of Jesse James, and what seeing it on a large canvas really brings.

So, what’s your daily working process looking like? What’s happening with you at this moment?

Well, I’m putting together the next movie, which is called Blonde and it’s about Marilyn Monroe.

Are you allowed to talk about that in any regard?

Well, we’re going to shoot it in August, and it’s scripted. We’re budgeting it; we’re planning it.

Good news. I was curious when that had been announced, so the occasional delays were the slightest bit discouraging.

Yeah, I’m very excited about this. I think this one’s going to be good.

We had spoken back in March — on the occasion of Killing Them Softly’s Blu-ray release — and, at the time, you told me you’d seen Jesse James about a year prior. After all this revival business was announced, have you revisited the film? Even just to look at the DCP?

No. I mean, I’ll probably have a look at the DCP just before the screening, but the thing I’m most looking forward to about the whole thing is just seeing the movie projected again.

When had you last seen it projected?

At the Venice Film Festival. Would you say the concept of this revival and its positive reaction has provided any sort of creative boost to your daily process? Does knowing of this interest in your work do anything?

It’s nice. [Laughs] You know? It’s nice. It doesn’t really give me a creative boost, because I was chucking away, doing my thing anyway. I’m really glad people like the movie, and I’m really looking forward to seeing it again. But, yeah, I wasn’t sitting around the house — like, wildly depressed, pajamas pulled up, and then I read about this thing in New York and got inspired to act, you know? [Laughs] That would be kind of silly.

At what point did you realize this wasn’t just someone’s crazy dreams?

I didn’t know what was going on, man. I mean, it was just the sort of contact made because, you know, he wanted to screen Jesse James at his bachelor party, and I thought he was crazy, you know? Just get strippers and an eight-ball. And, then, he rang back, saying, “Well, the museum wants to do the screening, and would you come out to New York if we did it?” And I said, “Okay.” And it turned into this whole thing of, like, trying to get Jesse James to be a fixture on “the revival circuit,” if they do such a thing in America.

He’s got a screening it New York, it rolls out, and there are plans to do it elsewhere. He’s got to screen it somewhere else, and I think it’s kind of great. Jamieson’s very enthusiastic, he loves the picture, and I guess I kind of felt like… you know, I was amused and flattered by the whole thing, and I guess my idea was not to stand in his way. From my point-of-view, I don’t want to run around and talk about something we did seven years ago, you know? But I’m glad someone else could do it.

It’s interesting that a lot of people will now see this on the big screen for the first time, and with your preferred method of DCP presentation — as opposed to, say, just a projected DVD or Blu-ray. Does this matter to you?

Well, you know, it really is a “movie movie.” The images are bigger, and it’s a more immersive experience. Some films, I guess, it doesn’t really matter. I mean, speaking for myself, projection is so bad at so many places nowadays that I’d rather just watch a movie at home, because if I’m home at least I know it’s going to be in-focus. But we’re going to be screening the DCP from the DI [digital intermediate], which is the most consistent picture. It’s just a more immersive experience, you know? And that’s part of the design of the film — everything, down to the sound, is something that works better in a theater.

Have you spoken to Jesse James collaborators about this new movement?

You know, [Jesse James producer] Dede Gardner knows about it. Casey [Affleck] knows about it, and I don’t know if Brad [Pitt] knows — I don’t know what he’d say about it. I mean, most people are interested in moving forward. I mean, Brad loves that movie; it’s something he’s really proud of. I think it’s his favorite film that he’s been involved in, and it was the first Plan B movie he was actually in, so I think it holds a special place in his heart — and mine.

Do you like the idea of having this film still being “present” and something that can be taken notice of in this manner, even as you hope to launch new efforts?

No, I love Jesse James. I’m really proud of it. I really hope, at some point, I’ll be able to do, at some point, if it’d be possible to release a different cut — a longer cut of the picture. I’d love that. So, not at all, but, you know, nobody wants to do that yet, so there’s something to be done. I mean, the movie’s done. I finished the movie. At the point where the movie comes out into the public consciousness — or wherever it is — the movie’s released; it’s over, for me. Although it’s nice to see it occasionally, it’s… the movie is like the ashes of the experience of making it.

Have you looked for a home? I remember you saying it could be brought about in “half a day,” because the cuts do exist, despite any necessary transfer processes that are still required. Have you been talking to people?

No, I haven’t talked to anyone about it. As far as Warner Bros. are concerned, it’s not a title that makes a lot of money — so, I don’t think they give a shit. Or, I don’t know how the DVD sales were, or whether they believe there to be a market for them or anything. I always figured that, maybe someday in the future, that time would come: someone would be interested in doing this, and at that point it would be very easy to reconstitute because all the cuts do exist.

Although you’re on-record as being happy with what played in theaters, was it nevertheless strange to see praise lobbed toward a film that wasn’t 100% the version you’d prefer be seen?

You know, I should clarify: there is a longer version of Jesse James that’s about 20 minutes longer, and I think it’s a really good version. And, then, there’s another version that I like a lot, that I think is better than the “big” version. It’s maybe about 4% different, you know what I mean? It’s very, very minor. I like the version of the picture that’s been released; I think it’s great. There’s just a couple of things I’d change, maybe. When watching the film now, do you go toward another iteration, or is it simply the theatrical version?

No, I watch the theatrical version. I mean, that’s the one that’s on Blu-ray, you know? And it looks really good.

Will it be strange to go back on a stage and talk about it in a public setting, since it seems to have been a while?

No, not really. I think that… you know what’s sad about it? When you meet a director, and you ask him a question about a film that you really love, and they pitch you the same story that’s told on the DVD commentary. It’s kind of like, you know, you work out your routine about the movie, and then fucking recycle it again and again. [Laughs] I hope I’m not like that, but it depends on the questions people ask.

Have people at the Museum of the Moving Image talked to you about this presentation?

Well, it is, indeed, a museum dedicated to items with an important place in cinematic history — old cameras, projectors, props from famous movies, etc. — and there’s also a theater that you see upon entering, where they’ll screen the film. But, yes, it’s mostly dedicated to film history.

I figured you were more familiar with it before all this, but it seems you’ll encounter it for the first time next month.

No, I’d never heard of it before.

Well, it’s wonderful. (I suppose I should say that, since they’re sponsoring the event.) I think it’ll be a good experience.

Yeah, I’m looking forward to it.

What would you say to people who get this rare theatrical experience with the film, specifically those seeing it for the first time in this environment?

Oh, man, I really don’t know what to say to that. I mean, all I’d say to a person before they see a film is absolutely nothing, you know?

The Jesse James Revival kicks off on Saturday, December 7th at the Museum of the Moving Image.