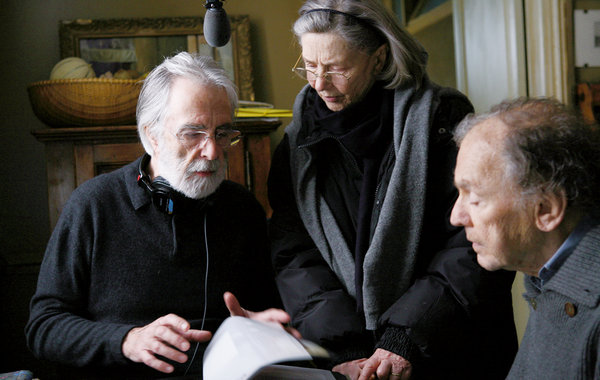 An awards season dispatch hit from the London Critics’ Circle Film Awards, who’ve hoisted plaudits upon Amour, Michael Haneke, and Emmanuelle Riva, with respective awards for Film of the Year, Screenwriter of the Year, and Actress of the Year. The man’s own tight-as-a-drum direction, though good enough to earn that film top honors, couldn’t snag its own statue; Director of the Year landed in the lap of Ang Lee for Life of Pi, a work that, funny enough, is about as far as one could get from Amour. Depending on how you read either film, I suppose. [Variety]

Now, in spite of some shared wins and nominations between the London Critics’ Circle Film Awards and next month’s Oscars, I wouldn’t be too confident in calling this a sign of things to come. We’ve got different groups with different sensibilities and, further to the point, some altogether different choices lying in front of them. (Not as much campaigning on this one, either.) That being said, it’s not such a bad day to be any of these victors who, too, are going into the biggest awards show of all with some hopes — which, given some recent comments, will actually leave Joaquin Phoenix totally immune.

Is there anything strange or unexpected about these picks by the London group?