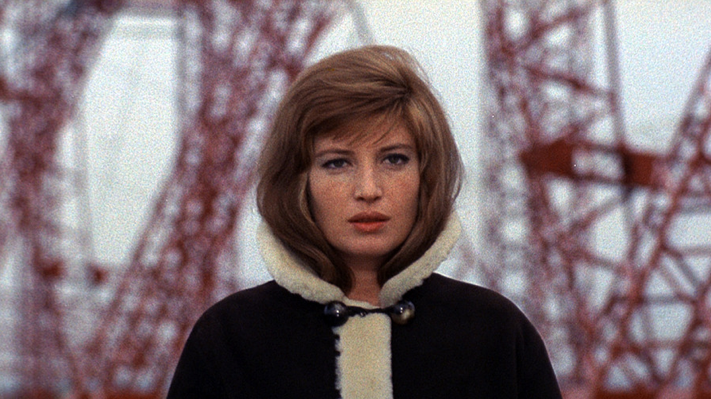 On the occasion of Michelangelo Antonioni‘s 100th birthday, we’ve decided to publish a piece on his 1964 classic, Red Desert, with a specific focus on its Neorealist roots and three-tier implementation of color. The intention of this article, if any truly exists, would be to inspire some discussion about one of Italy’s greatest filmmakers and, in this instance, one of his most celebrated works.

While Michelangelo Antonioni came to be regarded as one of Italy’s great Modernist artists through a career that spanned half a century, 1964’s Red Desert saw him “going forward by going backward” and “returning to the cultural antecedents of the post-war movement,” embracing the Neorealist storytelling of artists such as De Sica, Rossellini, and Visconti (Marcus 189). This isn’t to say that Desert is old-fashioned, particularly when speaking of the period in which it was made; in fact, it could very well stand, on a formal level, as one of the most (for lack of a better term) modern examples of cinema seen up to that point.

Whereas Bicycle Thieves or Rome, Open City used the scars of a recent war to examine an environment and those who inhabit it, Red Desert explores these through personal grief and the looming shadow of industry. Giuliana (Monica Vitti) is a woman irrevocably shaped and damaged by the world of technology, someone ensconced by factories, grime, the fog of production, and the men who do the actual producing. In what’s been referred to as a story of “interior neorealism,”  the contemporary social problem isn’t poverty, crime, or unemployment – it’s depression, which Antonioni treats as just a natural outcome of this setting (Marcus 188).

But if there’s one thing that allows Red Desert to stand apart from its Neorealist forefathers and embrace a modern sense, it would, undoubtedly, be the use of color. Antonioni’s past films – Il Grido, L’Avventura, La Notte, and L’Eclisse being the primary examples – are often noted for the way in which black and white cinematography surrounds their characters and creates an overpowering feeling of ennui. Here, he’s using color film as a way of externally communicating internal feelings, some very Neorealist feelings – loss and confusion – among them. Like its post-war predecessors, this is very much a story that relies “more on gesture […] landscape, and architecture, than on dialogue” to build character profiles (Williams 3). This might be lost on many people, however; Antonioni’s use of color is so intricate and layered, so ingrained into Red Desert’s fiber, that a familiarity with the film as a whole is essentially mandatory for the intended effect to truly sink in. (Speaking personally, this comes from someone who first saw it about a year ago and fully appreciated it as an emotional journey, but, then, only noticed fragments of this scheme at play.) But there’s a simply key here: Filtered through Giuliana’s damaged perspective, red is a symbol of freedom, hope, and happiness; blue pertains to an uncertain future and the fears that accompany it; and the predominant color, gray, signifies emptiness and hopelessness. It’s in this way that Antonioni jettisoned a search for “the truth about contemporary Italy” by means of dialogue – something Desert uses to display a certain emptiness in its characters – transferring this common goal of Neorealism “from the level of theme to that of visual style” (Marcus 206).

Of course, gray compliments Neorealism’s mise-en-scéne to the most considerable degree. Just look at the landscapes through which Giuliana walks, or the factories only briefly punctuated by other tints; there’s a stark, overbearing drabness that serves as both a visual compliment to the black and white images of these aforementioned filmmakers, as well as, moreover, the visual expression of feelings that marked both Neorealist films and the characters who inhabited them. (A particular stand-out would be the empty streets outside her place of business, which bear an almost exact resemblance to streets traversed throughout Bicycle Thieves or Umberto D.)

Though brief, it’s also worth noting that this method’s impact is only further compounded during the picture’s emotional climax, in which Giuliana’s face is fractured by a reflected image of a gray coat owned by Corrado (Richard Harris). If you’re following the film with these schematics in mind, Antonioni has used both this object and his running visual theme to, here, literally multiply a sense of melancholy contained within a single frame.

As was also alluded to, Antonioni expresses hope and discord with red and blue, respectively, in ways that build entire scenes. In fact, a whole emotional arc plays out during the course of one sequence, wherein Giuliana experiences desolation, joy, lust, depression and fear – all through the juxtaposition of red, blue, and gray. While in her friend’s gray waterfront cabin, we see her traverse in her typical state; upon entering a red room with her friends, she exhibits signs of freedom and even promiscuity; the door to the room opens, other guests are seen, the previous gray exterior is now exposed, and her emotion rapidly shifts back to whence the scene began. It all comes to a head upon the burning of red wood panels – which could easily be taken as the literal destruction of ecstasy – after which she begins something of a nervous breakdown that climaxes outside the house, which reveals itself to be blue. (For further clarification: Blue is predominant during a scene wherein Giuliana awakens in a hyperventilated state, and it, most significantly, is the color her son – with whom she displays a frequent unease and general nervousness around – wears when first introduced to the viewer.)

This is only one of multiple instances in which these three primary options aid or infringe upon Giuliana’s life, all of which is at the service of conveying something dialogue would be at the service of in something with less artistic merit. Or, to form a more obvious bond with the movement at hand, it could be said that Antonioni was “seeking to do with color what his [Neorealist] predecessors has done with long unedited takes in natural light and real time” (Luzzi 2).

Red Desert does not feel like a Neorealist film in any definitive, normal sense, yet presenting itself in such a manner would only betray the basic artistic intentions. From an opening which uses inanimate environments as a mode of strangulation to an ambiguous, replete-with-symbolism conclusion, it’s truly of the most layered and affecting films to be found in the movement; it only took about twenty years to arrive.

Note: The above article was originally written by yours truly as an academic paper, the circumstances of which account for quotes, MLA citations, and a brief bibliography below.