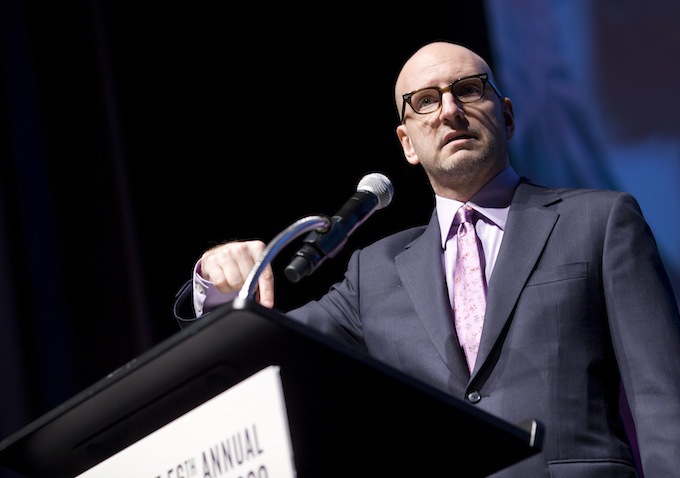 Rare is the man whose gradual phasing into an extended break can earn him more coverage than ever. It’s part of the Steven Soderbergh pattern: premiering an HBO movie (in competition!) at Cannes, tweeting a spy (?) novella entitled Glue, talking up a mini-series based on the work of Jon Barth — all of these items are only coming into focus when we assume he’d have settled into a lower register.

This less-than-opaque gravitation toward any artistic expression that does not involve the movie industry has been crystallized in a recent speech delivered to attendees of the San Francisco International Film Festival. Going on for almost 40 minutes, Soderbergh — speaking in his typically dry, erudite candor — laid down a set of examples, experiences, and reasonable hypotheticals that come to comprise what some are already calling a manifesto; while this is not exactly correct, it does capture the almost-vigilant nature with which he spoke.

We’ve decided to highlight five points that made Soderbergh’s address particularly memorable and noteworthy, the selected bits ranging from insider’s perspective to particular ways of approaching the medium. These are not the only concise and worthwhile things to glance over, mind you — the full text runs for thousands of words — but, merely, what stands out to yours truly as the most enlightening. If you can, please be sure to give the entire speech a glance.

Without further ado, here’s some of what Steven Soderbergh had to share, followed by the full video.

There’s a Difference Between Cinema and Movies

If this section was titled “Steven Soderbergh Embraces the Auteur Theory,” you’d get the idea at first blush. By that token, don’t think a director who’s shown himself capable of embracing lighter, more “fun”-oriented work — e.g., the Ocean’s trilogy or Haywire — is turning his back on the idea of cinematic entertainment and drawing lines in the sand. What he has in mind is far more complicated.

Commencing this point with the sub-idea that “a movie is something you see, and cinema is something that’s made,” Soderbergh expanded outward by emphasizing the notion that cinema, as opposed to a movie, needs the authorial voice behind it — to “have filmmakers out there who have that specific point of view” — in order to simply be. This isn’t simply the filmic medium he’s talking about, for the record: the possibilities of cinema, as he defines it, exist within all recorded, moving images.

Unsurprising, then, that it’s money which Soderbergh sees as “the force that is pushing cinema out of mainstream movies.” Want to take a guess as to what he thinks of those possessing and allocating funds?

Well, duh, right? Some notable exceptions notwithstanding, any one of us can look at the multiplex marquee and understand, with little exertion, where the interests of Hollywood lie — and said exceptions don’t come about because some CEO was really hoping to “get this one right.”

Taking it a step further than what the brave whisperers around town will have you know, things look even worse when you go behind closed doors; since he won’t have to answer some suit’s demands for a number of coming years, it’s only right that Soderbergh — possibly the finest living example of navigating that dangerous “one for them, one for me” model — let some more cats out of the bag. Initially decrying that “[t]here are fewer and fewer executives who are in the business because they love movies [and] fewer and fewer executives that know movies,” further animosity creeped in when approaching that specter known as foreign markets.

The reason we get one mindless Johnny Depp vehicle after the other — or a sixth Die Hard — and a force that only grows with each profit-turning title can, you’ll be so shocked to hear, be a pain in the neck for free-spirited types. As a clear confirmation of what we had already deduced via numerous Box Office Mojo pages, Soderbergh provided a quick rundown of “obstacles” foreign audiences — 70% of a typical blockbuster’s revenue — might have to endure if voices like his can flourish: “cultural specificity and narrative complexity, and, god forbid, ambiguity.” Take this as an echo of the speech’s opening moments, wherein he bemoaned the way people find David Chase’s smash cut to black a greater offense than moral atrocities carried out in the Middle East.

All Trailers and Posters Feel So Familiar for a Reason

First citing this week’s Iron Man 3 — to some, already a prime example of unnecessary saturation in marketing — Soderbergh tried to explain the method by which a piece of marketing is carved out and placed in big theaters all over town. The answer? Nothing too far from putting the item through some machine that shapes it to widespread, commonly accepted formulas — all because this is what people find themselves comfortable with.

So you’ll notice that most big-budget previews — even the good ones — check off the same items as those in their general cinematic category; the man at hand has made strives for something different, and unsuccessfully so. His points of contention — “that maybe the thing that’s making it distinctive and score poorly actually would stick out if you presented it to these people the way the real world presents it” — inevitably fall on deaf ears, whether they belong to executives or audience members. If it looks or feels different, test numbers will fall, studios will balk, and it’s back to the original parameters.

While acknowledging that these safety measures can yield genuine benefits, a movie like Side Effects, what with its thriller plotlines and “[f]our attractive white people,” still didn’t make the type of financial waves anticipated by such processes. Magic Mike, predicted to have a soft entry into the marketplace, made an opening weekend turn worth twice the assumed amount. And no one will be able to tell you what gives.

We Can Forget How Hard it is to Turn a Profit

Here’s where you get upset that this guy never directed Moneyball. Connecting right back to the issue of advertorial inundation, Soderbergh threw down some statistics regarding a studio’s line of reasoning — part of his confessed attempt to “sex this up” — and, remaining consistent with other comments, how these can interfere with truly logical steps.

Do you ever think about the theaters? Not where or when you’re going, not about the quality of projection, not about the density of crowds on a given night — instead, how they factor into box office. In his experience, a venue is bound to earn somewhere around half of the money you paid for a ticket. Over time, this makes a considerable impact: the movie that cost $100 million to produce and takes $60 million to sell now requires approximately $320 million of box office gross to earn for the studio. An ostensibly $100 million movie in need of $320 million. Feasible as a goal, if not… mathematically odd.

Memento Hurt, Then Healed Some Personal Perspective on the Industry

There are nooks and crannies of Steven Soderbergh’s career that raise an eyebrow, and his executive producer credit on Christopher Nolan’s Insomnia is one that’s never felt especially clear. It was at the speech’s end when he almost provided context in some roundabout way, essentially illustrating the (pardon) inception of his relationship with a then-upcoming British talent by way of a story about seeing Memento.

Although Nolan’s inventive psychological thriller has accrued positive notices during a number of festival appearances, it almost fell into obscurity for one simple reason: the checkbook holders weren’t biting. After accepting an agent’s invitation to check out the troubled movie for himself, Soderbergh thought the trade he had dedicated so much time and effort to — the very same trade that wouldn’t give this new vision a chance — was done with, as far as it could be seen.

Newmarket’s decision to release Memento themselves earned equal amounts admiration and reassurance. (Actually making some money back couldn’t have hurt that latter sensation.) Regardless of how you see the recent phase in Nolan’s career — one that favors titles a corporation would find vastly more appealing than his chronologically jumbled breakthrough — it’s those following in his footsteps who give Soderbergh reason to maintain even the smallest shred of optimism.

Do you agree with Soderbergh’s thoughts?