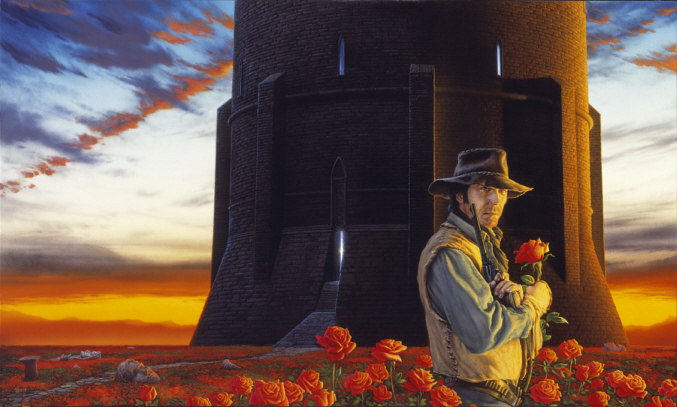 What many people don’t realize about author Stephen King is that he’s written an epic on the same scope of The Lord of the Rings, called The Dark Tower, and that he has managed to connect almost all of his other writings to it. What many people also wouldn’t realize is that there have been attempts to bring this series to film, with, up until this point, only complete failure. Now, that is probably going to change, and not only will be getting a few films based off of the series, but we’ll be getting a few seasons of television adapting it as well.

Ron Howard, Brian Grazer, and Akiva Goldsman, better known as director, producer, and writer, will be tackling the epic series by doing something completely unprecedented. The seven book series will first get a film adaptation. Then, there will be a season of television covering the area that the film couldn’t. Then, a second film. When we get to the second season of television will cover the adventures of the main character, Roland Deschain, when he’s a young man (which is apparently the bulk of the story for the fourth book, and the comic series that has been published), and if that wasn’t enough there, we’ll see a third film, probably concluding the series, but even then there could be things to see beyond that point.

I’ve read and enjoyed the first two books of the Dark Tower series, but for some reason never continued beyond that point. Some people have said that the series falls apart at the end, but this news has me wanting to read the rest of the books and the comic series. Interestingly, there is at least one more book coming, which will not necessarily be about the main character. And I don’t think that is the right team to tackle the series. This is a weird, weird set of books, and it has things like a unique language spoken by the characters and a long, winding story that reaches out to connect with every other story King has written (I’m not kidding), the latter of which will probably not be saved for the movies and TV seasons. Howard is a respectable director, but not someone who could really pull off a work that would be on the same level of strangeness and epicness of what the books and comics accomplish. And Akiva Goldsman wrote Batman & Robin. How could that be good?

What are your thoughts on the Dark Tower series and on the team of Howard/Grazer/Goldsman taking on the books?